Drawpile can record a drawing session for later stroke-by-stroke playback. The recording is made in a custom format, but can be exported into a regular video playback. The format is fairly resistant to file corruption, so a session recording is also a good way to rescue your work in case the application crashes. 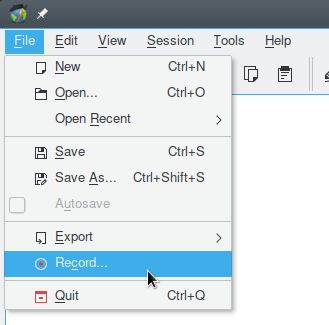 To start recording a session, select the Record... entry from the File menu. Recording works both in offline and online mode. 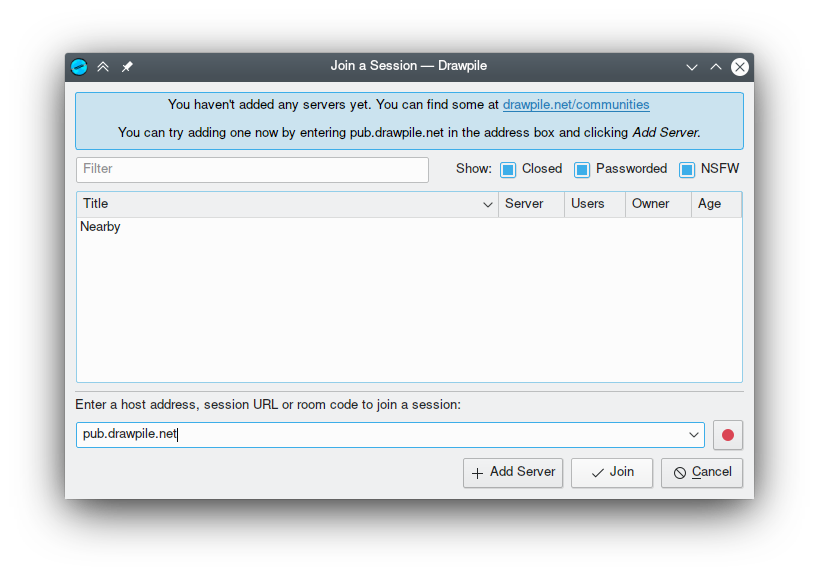 If you want to record a session you're joining, check the record session checkbox in the join dialog. Recording will then automatically start when the connection is made, ensuring the entire session history is captured. The recording will be saved in the folder specified in the preferences dialog (animation tab.)

An icon is shown in the right corner of the status bar when recording is in progress. You can stop recording by clicking on Stop recording in the File menu.

To play back a recording, open the file as any other image file. A playback control window will pop up:

The dial on the left controls playback speed. Playback is toggled using the play button. The next two buttons step the recording forward either a single event or a single whole stroke.

Generating an index will allow you to jump forward and backward to any position on the recording by double clicking on the timeline or by jumping to a marker.

Compressed recordings can not be indexed, nor does the playback progress bar work with them.

Version 2.0 uses a different format and is thus not compatible with recordings made with older versions.

Filtering allows you to remove unwanted parts of a recording, such as pauses and undone actions.

If you plan on generating an index for a recording, it is a good idea to filter away undone sequences first, since undos may not play back correctly after jumping backward or a long distance forward.

Clicking on the Export video button will pop up a dialog to configure video export.

Image series is the best choice if you want plan on postprocessing. Ffmpeg is used for direct video export. Support for animated GIFs is fairly basic at the moment and not recommended for long recordings or large canvas sizes.

For best possible quality, export an image series and use separate video editing software to compress it into a video.

When autosave is checked, a frame is automatically exported whenever playback is advanecd. Note that during autoplay mode, pauses are exported as well! If you do not want pauses in the video, set max. pause to 0.

Usually, the steps to export a recording are simply: